Welcome to RubyRed Productions! I named my production company after my mom and dad (my mom’s first name is Ruby and my dad’s childhood nickname was Red). It started in a studio I bought in Atlanta, GA that used to be an old studio called Purple Dragon way back in the ‘80s. It had a colorful past to say the least.

When I bought and started remodeling it, I found the old SSL automation floppy disks for Elton John’s “Lion King” sessions that were recorded there, along with several syringes and other drug paraphernalia behind the fridge that belonged to the old owner, apparently.

My friend used to engineer there back in the day, and he told me that the big dent in the monitor section of the SSL 4048E that came with the place was from a police SWAT team raid. Apparently, two thugs showed up demanding their tapes from the studio owner and pistol-whipped the engineers. When the SWAT team showed up, the thugs jumped on the console to climb up and hide in the drop-tile ceiling, only to be caught and arrested by enforcement.

When I found myself needing to relocate to LA due to my growing producer demand out there, I sold it. I moved an entire semi truck of studio to a house/studio in the canyons of Malibu, CA, and all was great until a wildfire struck Malibu in 2007 on Thanksgiving weekend. It wiped out my entire house and studio while my family was in NY for holiday, and I came back to nothing but the suitcase and the acoustic guitar I had with me.

It was an awful blow to the head and heart, but I eventually and slowly collected one piece at a time, and got together a decent little pile of creative toys over the last 10 years. I also built my own studio in Santa Monica near the beach, and I love it.

This is the heart and soul of my studio. It’s an early-’70s Quad Eight 2082 that has been meticulously restored by my tech after I found it in pieces in a studio in Washington.

This console was the famous Steely Dan console on the back of their album Countdown To Ecstasy, and they used this room exclusively at The Village Recorder in Santa Monica Weird that it’s back where this console’s life got its start!

Many cool records at the time were done on this console (Fleetwood Mac, KISS, Cheap Trick, etc.), and it’s been a total workhorse for me. Everything goes through this console before it hits Tools/Tape. 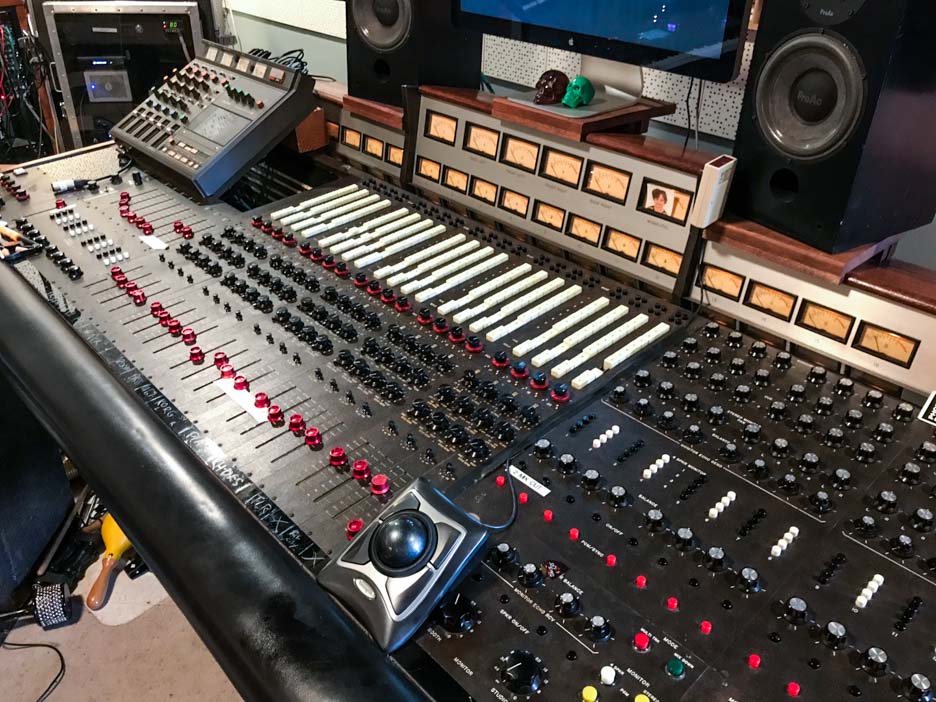 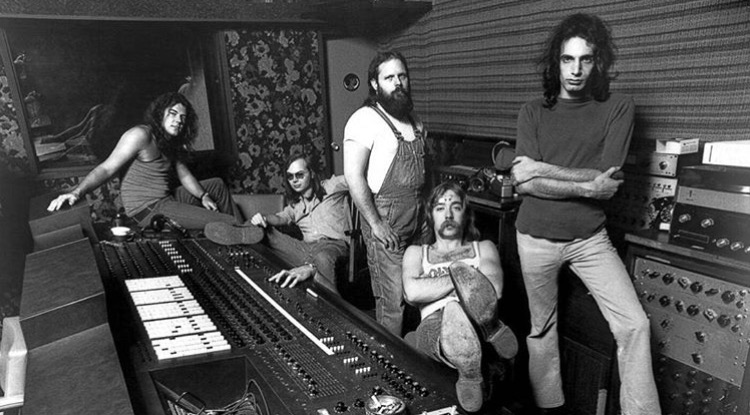 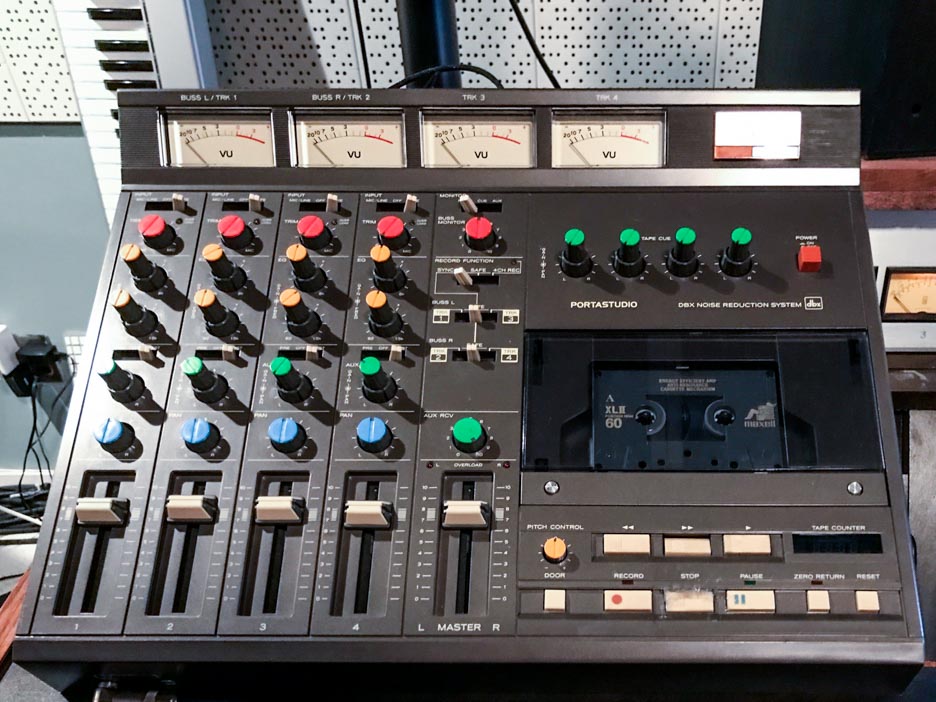 I can’t leave out my trusty Teac 244 4-track recorder (bought on Reverb). I learned how to record and overdub on one of these in my mom and dad’s antique shop behind our house.

I think it’s essential for kids today to start learning the art of recording with one of these, instead of a computer. It will teach you how to be creative outside of your limitations due to track count, no editing, no correcting, etc. You will be a better player, singer, writer, engineer because of it, I promise you that.

Plus, they sound cool as shit. Sometimes I run the mix through it, and back into Pro Tools so that I get the flavor that it brings. Nothing like them. 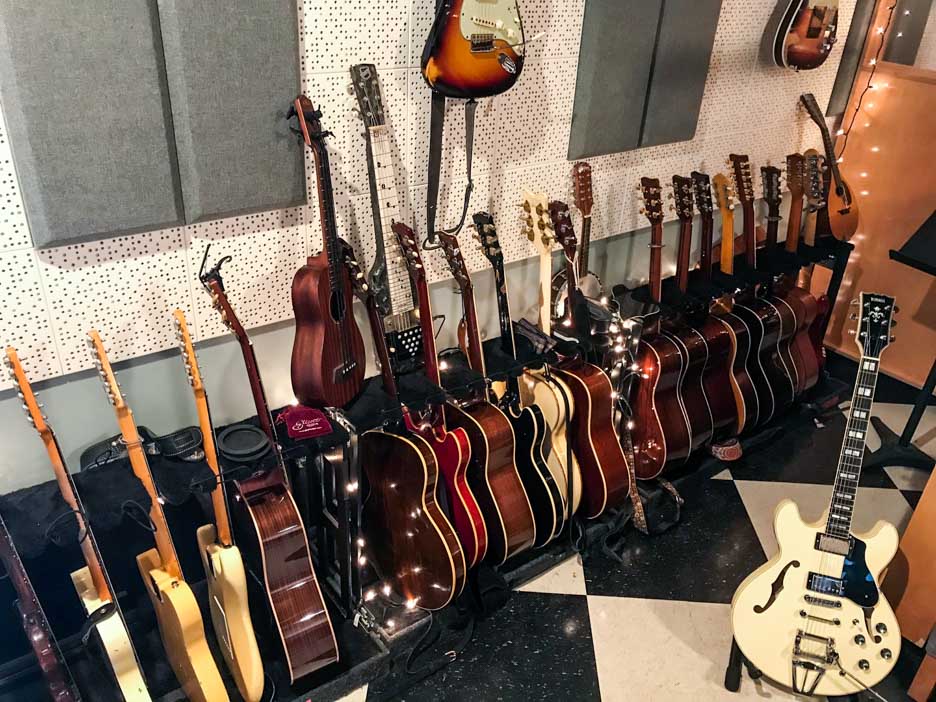 Guitarmageddon here. I am a shredder, first and foremost, so I love me some guitars. We (my engineer Todd Stopera and I) have a little of everything. We aren’t trying to pride ourselves on our collection of “rare” or vintage instruments that may sound good but would be a bummer to scratch or drop.

I like useable shit. Stuff with a soul that can be found for $200 from a pawn shop. But the occasional boutique guitar or custom shop model is also fun. To me, guitars are for playing, not collecting. I have a good selection of Fender, Yamaha, and Duesenberg stuff, along with some random acoustics of all types.

I’m a minimalist with outboard gear and don’t find myself wanting too many options. I know what I like, and I know how to get the sounds I dig in a matter of minutes. Here are just a few pieces at ЯR in Santa Monica — some Neve 1073s, 2264As, some Chandler TG1 and TG2s, Retro Sta-Level and Pultec-style EQ, Radial JD7, Distressor, Altecs etc. 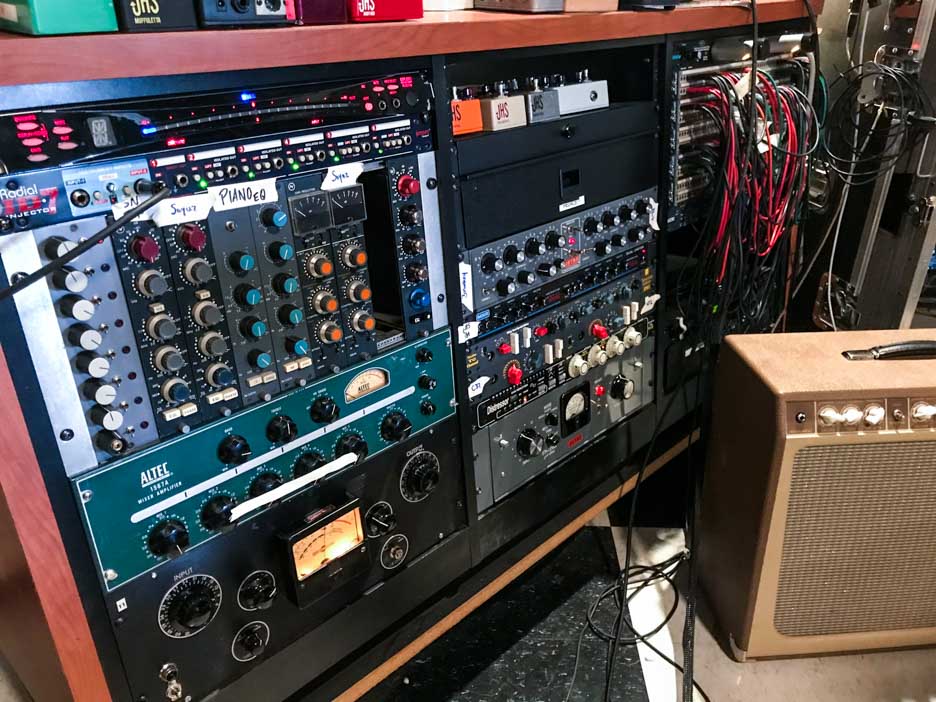 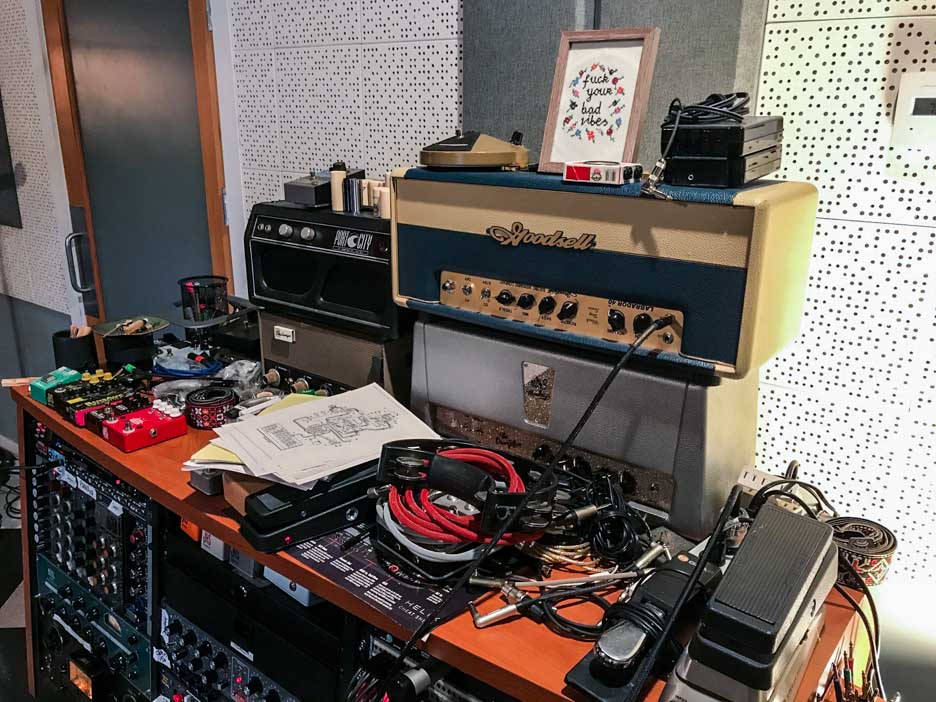 I have tons of guitar amps that I rotate, but I don’t like them all over the studio, so we keep a couple at a time in the room. Two of my favorites are my 3 Monkeys Orangutan and my Goodsell Black Dog that are going to their respected 2×12 cabs in an ISO booth (not pictured).

I also always have my trusty silverface Fender Deluxe Reverb amps handy. We also have a mountain of cool pedals — I use my own signature overdrive pedal made by JHS called the RubyRed quite a lot. I also just picked up a Helix by Line6, which is pretty kickass at being a Swiss Army knife for a sound I may not have in one of my existing amps or pedals. I’m not a precious purist. If it sounds cool, it is cool.

Never underestimate the genius of Tom Scholz. He was the guitar player and producer of the ‘70s arena rock band Boston and the creator of the first really good direct recording guitar amp simulator (also a handy headphone amp) called The Rockman. This box is the sound of every guitar on Def Leppard’s Hysteria album and many a session guitar solo on the radio through that era.

I remember saving up to get one of these as a kid, and I used it for awhile as my amp, direct through the PA, with the Top 40 cover band I was in. In the studio, I run a Y-cable in stereo because the chorus effect is so good that it’ll make the spiked-up, bleached blonde hair on your head fall out. Instant Mr. Mister. 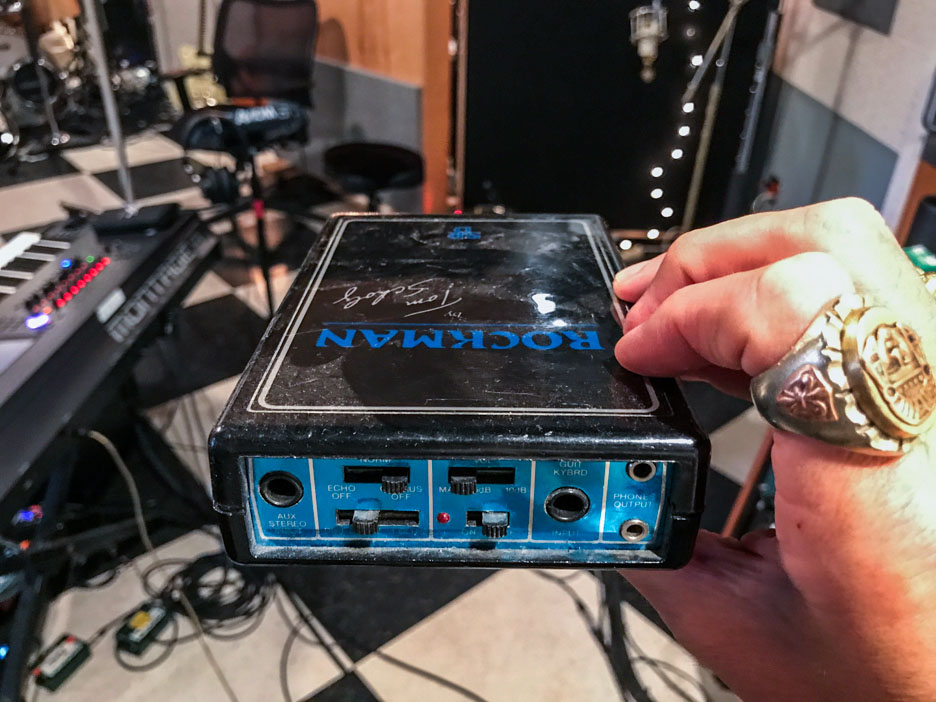 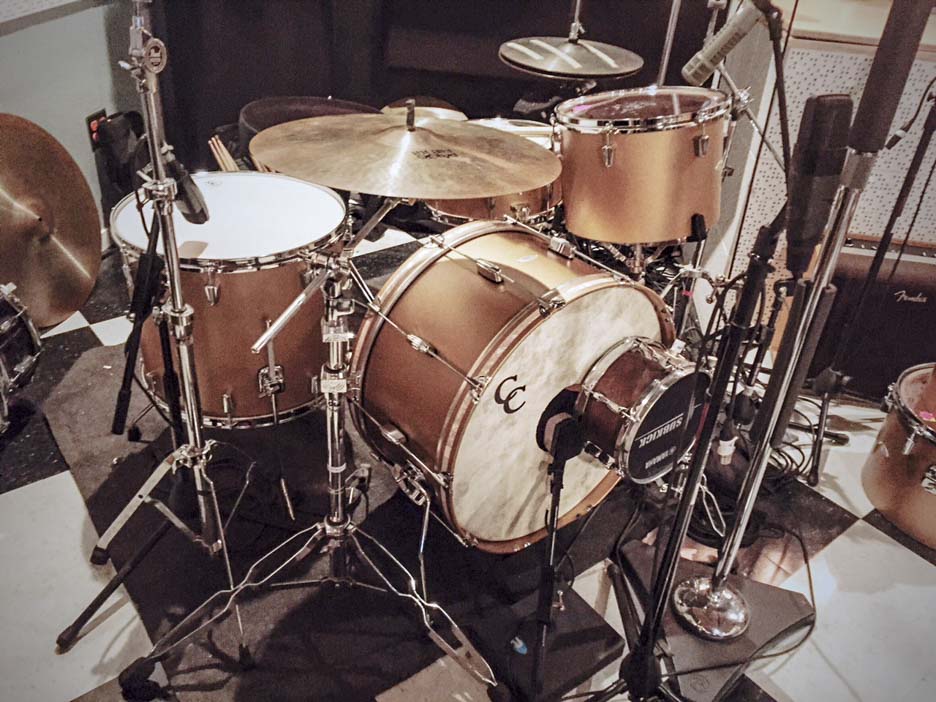 Drum world is small but useful here. I use a pretty random assortment of drums made by C&C drums, Ludwig, and Slingerland — some old, some new. Like I said, I’m not precious. Really digging my CC Concert Tom kit these days. 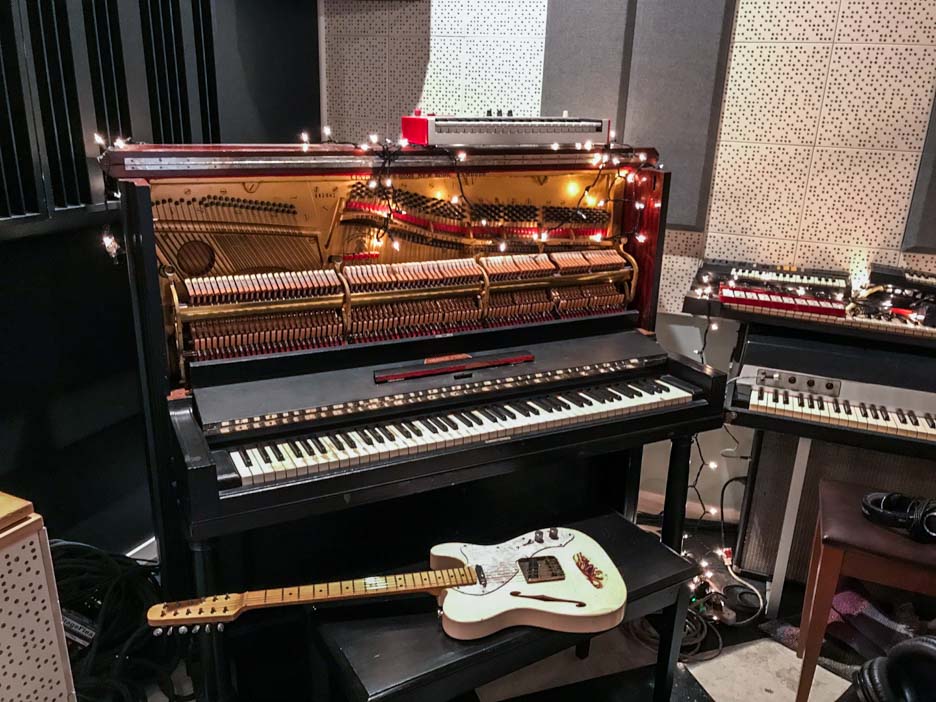 This is my baby. My old engineer, Jake Sinclair, found me this late 1800s Steinway upright grand piano in some rich person’s garage up near Oprah Winfrey’s house. They let us have it for $1,000, and it’s the best-sounding piano I’ve ever had or heard. It has a soul like no other, and its imperfections are perfect. I’ve used it on almost every recording I’ve done for the last 10 years.

Wade over at Chandler is my dawg and he is making some of the most incredible stuff these days. I’m blown away by the new REDD mic they have. I am using this on everyone. It sounds incredible and has one of their EMI mic preamps built into the mic. It’s incredibly convenient but more importantly, it sounds disgustingly good on everything. 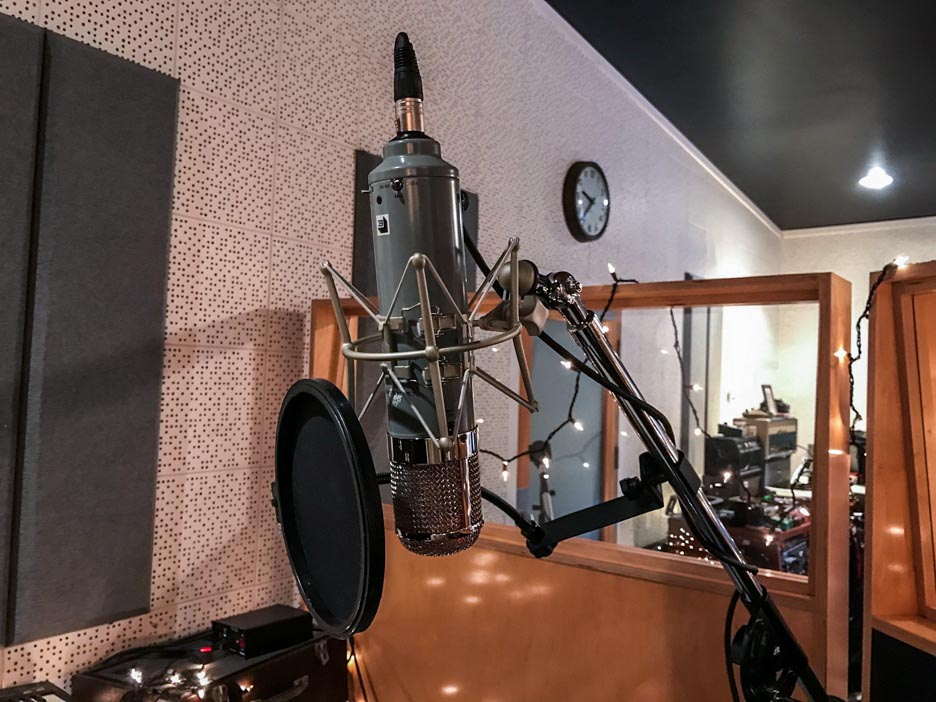 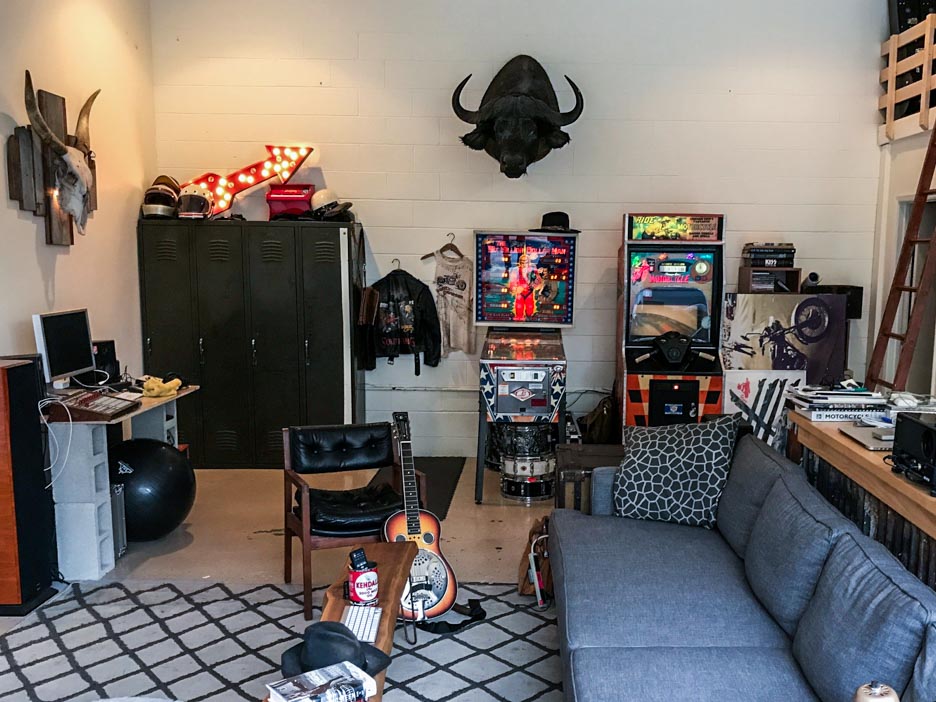 This is the hangout area. Very important at a studio. People usually roll up the big industrial garage door, sit in the courtyard, or watch a movie on the big screen projector.

This is my escape from whatever music I’m making at the time. I put on records on my Basis 4000 turntable through my McIntoshMX110 tube receiver, through my MC2505 solid state amp. I love this setup. People are usually surprised that I’m usually listening to Stan Getz or Tom Waits on this rig most of the time. 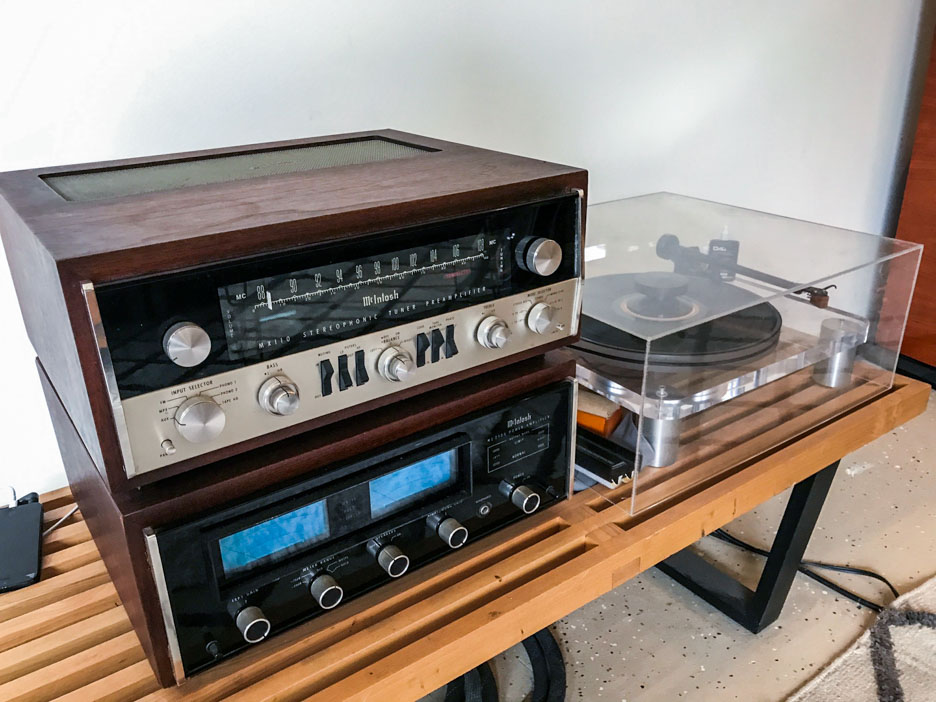 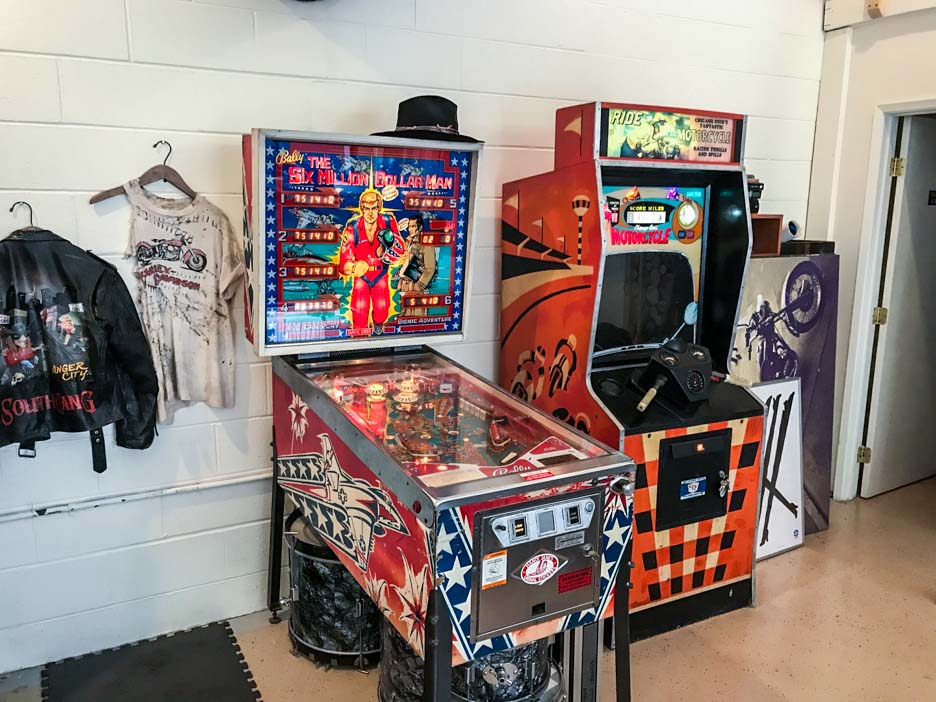 One of the few things that survived the big fire was my Six Million Dollar Man pinball machine (because it was in storage when everything got burned), and I’m so glad I still have it. When I was a kid, I used to go to the corner grocery store and play pinball after school with the quarters I could find in the couch at home.

When I made my first decent paycheck at music, I went and bought that machine. The motorcycle game next to it was a gift from my pal Ryan Adams (he’s an avid game collector like no other). It sometimes comes on by itself and has a mind of its own. I love it.

The jacket pictured to the left of the games is my old hair metal band jacket from 1988 that I bought when our band moved to LA. Before rock ‘n’ roll got so self aware and sensitive, it was cool back then to actually flaunt your band’s name on your clothes, jackets, shirts etc. (kinda like hip-hop does now). We all had a guy custom paint the back of our leather jackets with our band name. Humble brag: I can still fit into this thing 30 years later.

We also needed a space with a garage because my engineer, Todd, and myself have a motorcycle problem. He loves to work on vintage Harleys. We don’t have every bike we own in this picture because some are at my house or back in Nashville where I split my time, but this is a good idea of where the money goes that I make from music. We ride pretty much every day, so you need a place to maintain these things. 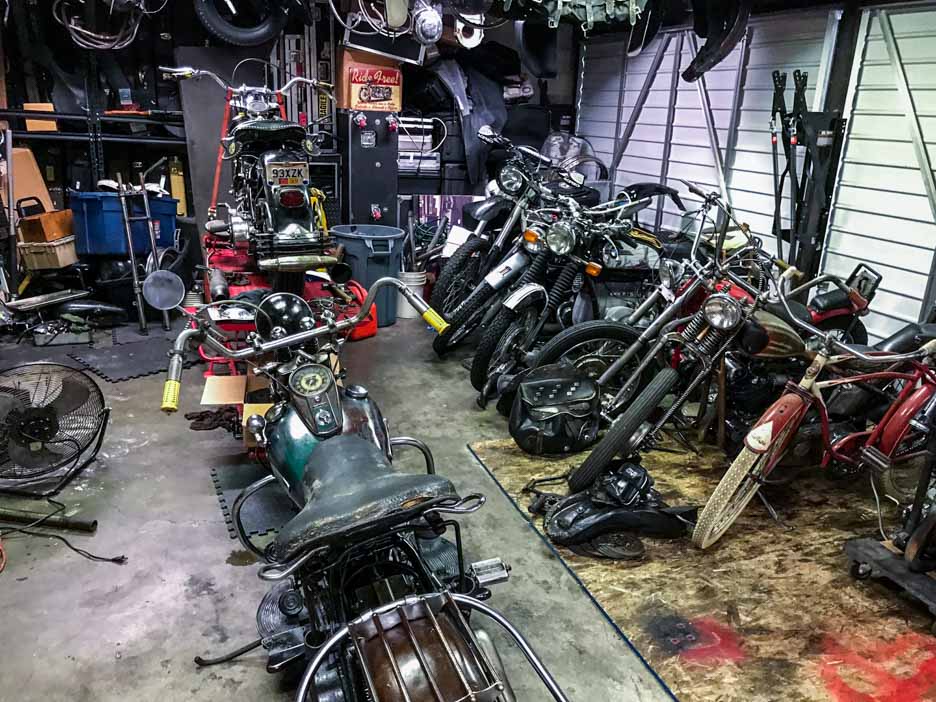 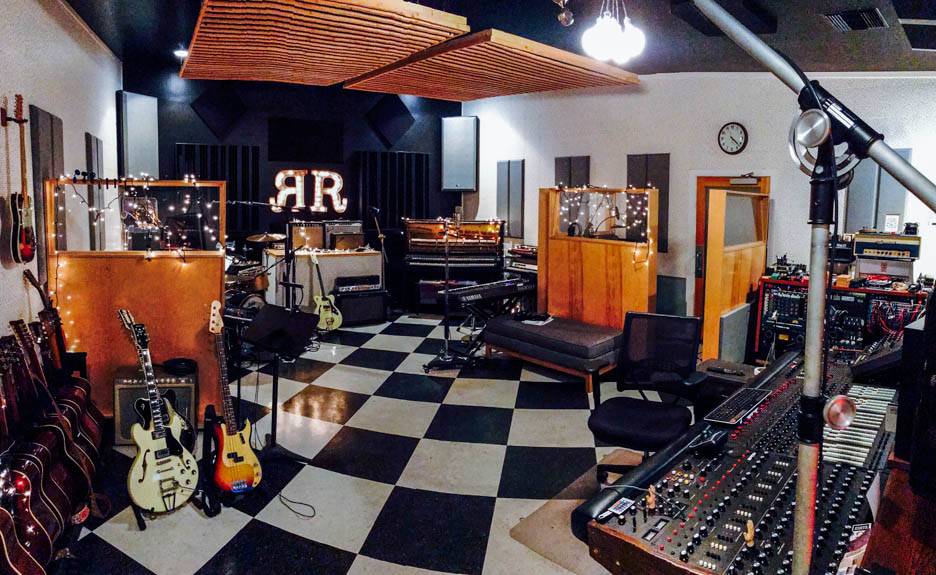 A wide angle shot of the tracking room. I’m a big fan of having the “one room setup” for the control room and tracking area. I do a lot of records where I’m playing a lot of the instruments, and I like to turn around and grab it and go.

I don’t care about conventional acoustic treatments, separation of sounds, etc. None of that shit matters when making a great recording. I’ve made some of my best recordings in bedrooms and some of my worst ones in $2,500/day commercial studios. Just because there’s a good-looking receptionist and a nice fruit bowl and deli tray doesn’t mean you’re gonna get an inspirational recording done.

I like a comfortable atmosphere where people aren’t sweating the clock because of the pressure to deliver every day due to the cost and intimidation of the building’s “pedigree.”