This amazing 1959 Gibson Les Paul Standard has sold. This guitar was owned by Joe Walsh. Evidence suggested it was owned in ’75 and traded by Joe in the 1980s. It was pictured in a famous book from Japan: “The Beauty of The Burst”, plus was in “Gibson Electrics Volume One” by the best writer in the vintage guitar field, A. R. Duchossoir. (it’s not in Volume 2.)
Also seen in a famous out-of-print book: “Guitars of The Stars: Rick Nielsen’s Collection”. Rick of Cheap Trick states in the book: “Thanks to Joe Walsh.”That book was published in ’92.

So, Joe used it on “You Cant Argue With a Sick Mind” and likely the record “But Seriously Folks…” that had the hit “Life’s Been Good”, and Joe owned it when he recorded “Hotel California” with the Eagles.
Joe told us he wrote quite a few songs on it. No wonder…it was magic. We let a few of you play it when you came to visit. I hope you took a photo.

Only 643 Sunburst Gibson Les Paul Standards were shipped in 1959, many of them had Bigsby Vibratos installed from the factory. The ’59-era “Bursts” are preferred for color (aniline dye used for the red), the neck size ,and the bigger frets. The late ’58 examples and the 1960 Bursts get less money as they mostly lack all these important features. Finding unbroken ’59 Bursts without Bigsby holes is getting hard. I admit a love of PAF “gold top” Les Pauls myself, and I kinda like smaller “Martin size” frets.

But this ’59 Burst went back to one of its original owners. You can read the story in the July 2022 issue of Vintage Guitar Magazine. Our guitar is seen on the cover. We delivered the guitar back to Joe Walsh.
It was light at just over 8 pounds and had the most amazing violin-type tone that has never been replicated in new examples.

When Joe’s number came up on my caller ID I was taking a nap (moving a store is exhausting). I had to slap my face to wake up. “Hi, Joe”. Joe had said he wanted it but it had seen a lot of wear. I had told him a week earlier it was a mistake to turn it down. “Your old friend has some grey hairs but it’s one of the best sounding LP Standards I’ve ever heard” .I sent him a video of David Hidalgo of Los Lobos playing it.
So Joe said: “I want it, this time I mean it. I bought a ’58 from Rudy’s in New York but I miss my old friend so Rudy let me take it back. Bring it to the Eagles show in Nashville, would you?” Done!

A happy ending. A fabulous guitar. A guitar that I heard on records growing up is now back in the hands of someone who loved it. Go read the story in Vintage Guitar Magazine – a must-have magazine. We returned the lost Jimmy Page guitar and now this one goes back to Joe…We love cool old guitar stories. Electric Hawaiian shaped like the Empire State Building. Has Hawaiian, Chimes and Harp selector switch, treble side volume control and metal fingerboard that is clear and easy to read. Everyone ... $1,500.00 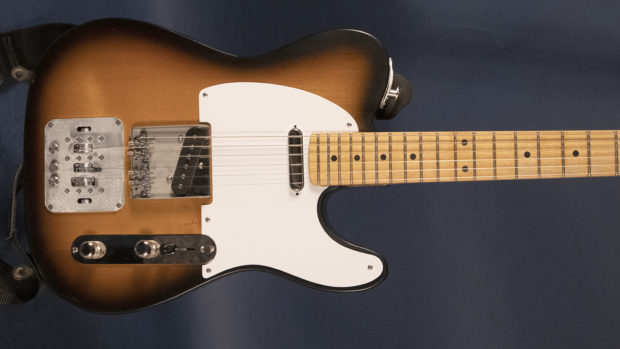